We have just launched Faithful Dissent: Loving Our Way Into a Brighter Tomorrow with Stanley Hauerwas and Ed Bacon For Individuals and For Groups. It was released as a Big Class from September 11-September 25, and its free period has ended, but you can still take it through your subscription, your church’s subscription, or through purchasing the course on its own. Take it on your own or with a group from your congregation.

This course covers faithful ways to engage dissent on several levels, both between people and groups within the church and between the church as a whole and the secular world when the values of one come in conflict with the values of the other.

the church’s discussions about its mission. In each of the synoptic gospels, Jesus is asked whether the Jews should pay taxes, and he responds that we should give to the emperor what belongs to the emperor and to God what belongs to God. The idea that the church and state stand apart from one another was relevant to Christianity even before the Church had been established.

The relationship between the Church and the secular world has included lot of overlap for most of the Church’s history. Some of this overlap has involved the day-to-day lives 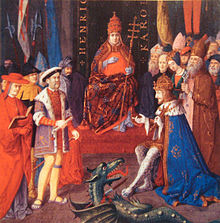 of ordinary people. Harvest festivals have become intertwined with Christian religious festivals, for example, and Christian religious festivals have become secularized. Secular and religious governing bodies have overlapped as well. The Pope and the secular kings of Europe argued for centuries over who would have more power (and what kinds of power they would have) over both the states and the people. Some governments have required their citizens to practice Christianity. Other governments have claimed a free approach to religion, while at the same time promoting Christianity indirectly. Secular laws have been justified for religious reasons, and religious edicts have been enforced by secular governments.

The line between the world and the Church, in short, has been blurry for many centuries.

In this course, Stanley Hauerwas and Ed Bacon explore the idea of the Church’s, by necessity, existing in a state of dissent from the world. They discuss the correct relationship between the Church and the world. Does the Christian faith require our being active participants in world events? Should we hold ourselves apart from them? How can we advocate for change in the corrupt systems of the world without to some extent becoming part of them? These are the questions that Stanley and Ed address.

They also discuss the role that dissent must play within the Church. It’s all very well to say that the Church must dissent from the world when the world’s values do not align with those of God — but how do we determine what God wants the church to do, as new ethical and moral challenges continue to emerge in our increasingly complex culture? Stanley argues that the Church makes those determinations through the very dissension that distresses us — that working through conflicting opinions through debates and arguments is how the Church has always determined the right way from the wrong. Ed, meanwhile, emphasizes the need for us to engage dissent (both with other Christians and with people outside the Church) in a healthy manner. He discusses ways to argue in a spirit of love with others — even with people who seem to hold values that are entirely alien to our own.

Both of these instructors have much to offer in a conversation about faithful dissent. Stanley Hauerwas is the Gilbert T. Rowe Professor Emeritus of Divinity and Law at Duke University. A prominent American theologian, Stanley has written many books and articles in the course of his career. They include: A Community of Character: Toward a Constructive Christian Social Ethic, Resident Aliens: Life in the Christian Colony, and Hannah’s Child: A Theological Memoir. To learn more about Stanley’s work, check out the Stanley Hauerwas blog.

Ed Bacon is the author of numerous articles and the book 8 Habits of Love: Overcome Fear and Transform Your Life as well as a prominent public speaker. From 1995-2016,he was the rector of All Saints Episcopal Church in Pasedena, California where he led the church in faith-based social activism. Ed is nationally known as an advocate for justice and peace for all people, regardless of race, gender, or sexual orientation.

We hope that you will bring the ideas that you develop in this course into your daily lives as together, we try to build a better Church and a better world. For a preview of the course, click here.

1. Image of a denarius from the time of Jesus. (Jesus uses a denarius to illustrate his point about giving the government what belongs to the government; see Matthew 22:15-22.) Creative commons.