We have just launched Praying the Examen with Chris Anderson For Individuals and For Groups.

Centuries after his death, our society still honors St. Ignatius Loyola, the father of the 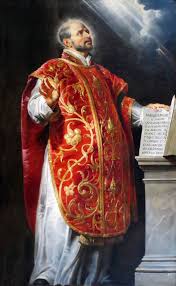 Jesuit order. Around the world, many Christians continue to make daily use of his tools for rich spiritual lives. In particular, Ignatius is responsible for bringing his interpretation of the style of prayer known as the Examen into public notice.

Ignatius initially intended the Examen as a prayer tool for the newly-founded Jesuit order, but soon, lay people were using it as well, and centuries later, many people still reply on the Examen as a foundational element in their spiritual lives. Practitioners of the Examen vary in age, gender, religious denomination, country, ethnicity, and their even belief in God. Different groups and individuals bring their own variations on the Examen to the table, but the essence remains the same: “To prayerfully reflect on the events of the day in order to detect God’s presence and discern God’s direction for us.”

In this course, Chris Anderson, professor of English at Oregon State University, poet, and Catholic deacon, will teach you about the Examen and introduce you to many resources available on this approach to prayer. We hope that you will use these lectures and resources to discover what approaches to  this prayer resonate with you, so that you may use these them to create your unique Examen experience.