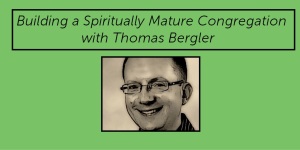 Today, we launched Building a Spiritually Mature Congregation with Thomas Bergler, available for individual learning and for group study. Much discussion has taken place over the past few years about how our culture should handle the lengthening of adolescence. The process by which children become independent adults has been delayed over the course of the past two decades. People are less likely than their parents and grandparents were at the same ages to commit to marriage and more likely to be relying at least partially on their parents for funds. One noted professor of psychology even has proposed that we add an additional stage to our lexicon for the maturing process: Emerging Adulthood, occurring between ages 18 and 25.

Enter Thomas Bergler, who has stimulated animated discussion over the past few years by confronting the issue of delayed adulthood in terms of how it affects the church. Dr. Bergler argues that the American church has been juvenilized; that faith has become immature. He argues that people who are swept up into Christianity through the heady experience of youth ministry sometimes never leave that level of spiritual maturity, but instead settle indefinitely into a moving but unformed spiritual adolescence. His books The Juvenilization of American Christianity and From Here To Maturity: Overcoming the Juvenilization of American Christianity have stimulated discussions across denominations of what adult Christianity needs and how churches must work to achieve it.

If you would like to learn more about Dr. Bergler’s work in this class, please watch this preview. 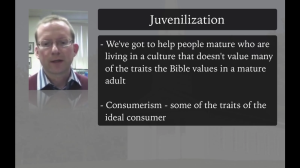